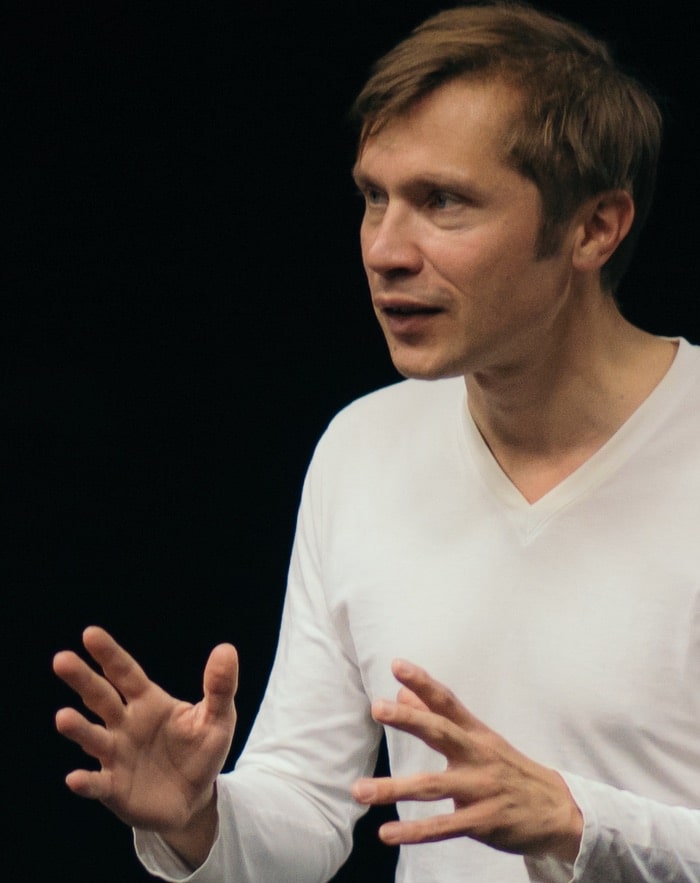 Creative Acting Through the Body

That’s what Impro Supreme is all about. It distils my 15 years of experience as an improvisational artist, teacher and performer into a coherent training system – for anybody who wants to become a more exciting and original actor.

The secret is to connect your body, feeling, imagination and gesture. Know what you’re doing – and get creative for real.

Trust Yourself as a Creative Actor

Learn to perceive and play with the fundamental aspects of human reality. Feel at home on stage and in the world.

Enjoy performing and radiate inspiration around you. Surprise and delight your stage partners and audience.

A FEW THINGS ABOUT ME

What is Impro Supreme about?

Acting is often too predictable, even when improvised. Impro Supreme is about training the core skills that you need to become a unique and consistently exciting performer.

In short, it is about creative acting through the body and how to achieve supreme improvisation.

Which means “to be all that you can be”. And then to act from that – whether you have a script to follow or not. So it’s not about improvisation per se. It’s about how to find your freedom as a creative actor.

Of course, acting is both physical and psychological – and always creative to a certain degree.

Unfortunately, many of us tend to do what we think we should do rather than pay attention and respond to what’s really going on.

Whether it’s what’s happening within ourselves or with our stage partners.

The goal of all Impro Supreme courses and workshops is to forge creative, playful, robust and independent actors and performers. Systematically. One step at a time.

Here I will soon link to a few posts that will give you a good idea of what to expect!

How I got to where I am

I didn’t set out to become an improvisation teacher and performer. And I certainly would not have made it this far and created Impro Supreme if I had not doubled down on physical acting.

Here’s the story of how learning to use my body creatively helped me trust myself on stage – and in life in general.

Like so many others, I discovered improv by chance. What first drew me in was the personal experimentation aspect and the sheer fun of playing. After a couple of years, it became more about acting and storytelling: improv theatre that was both entertaining and meaningful at the same time.

By 2009, I was artistic director of a well-respected improv company and co-director of our school. I had the most fantastic colleagues on stage and taught up to five weekly classes in both English and French. I went to festivals and attended workshops whenever I could.

But eventually, after thousands of improvisations, I started feeling a little bored with what I was doing. Also, I was more and more unimpressed with what I saw around me.

Around this period, I started to see what was happening (or not) on stage, i.e. perceiving and understanding acting as movement, attitude and gesture – and not just as action and story.

To begin with, I only noticed when nothing was happening. Of course, actors would be moving, speaking, waving their arms and so on, but watching them felt cold and empty.

I spotted this nothingness both in big professional productions and amateur shows. Even in performances billed as physical theatre.

The performers weren’t fully present in these moments:

This phenomenon stood out more and more to me. And how so?

Because I also recognised it in myself.

Clowning – Or Playing for Real

It is not that everything I saw was terrible, far from it. My own performances were not miserable either. It was just a case of hit-or-miss.

How could I improve – or assist others – if I could not nail the difference between mediocre and superior performance?

I had already started practising at home on my own. But I had focused on movement exercises. Because I thought that physical acting was… well, physical.

All this changed in 2010 after participating in my first 3‑week clown intensive with Ira Seidenstein. Many participants had about 10–20 more years of experience than I did. But everybody was struggling to crack their code, so to speak. We were all primarily working with and for ourselves.

I finally understood that this work went much further than technique. That not much would ever happen until I started honouring my creativity. Until I started playing for real.

After returning to Paris, I systematically included all the creative exercises in my regular training. At first glance, they may seem utterly simple, but the more you engage in them, the more you learn to take ownership of your creative acting.

That’s what I did… and that’s also when things started to improve drastically.

I became more stable on stage and felt more confident in teaching and directing others. I was beginning to see and to feel – and to act accordingly.

In other words, I was learning to trust myself.

I practised on my own and experimented together with my colleagues and in my classes. Little by little, it was all coming together. I could sense how things connected. Finally, I knew what I was doing.

I felt a sense of completion: this was the foundation, and now I could really begin to do stuff!

Going Solo – And Beyond Pure Improv

When I got the opportunity to do a solo improv show, I thought it would be a one-off…

But it quickly developed to become my own transportable playground and performance laboratory. I would take ideas that came to me while practising at home and try them in the next show.

That’s how my one-man show was born and gradually found its form. While keeping it improvised, I started repeating characters and situations that I enjoyed and wanted to explore further.

Eventually, it turned into a variety comedy show with more or less loose acts, sometimes including singing and dancing, and always with a considerable dose of clowning and mime.

In 2014, a group of wild Bulgarian actors came to present their improv show in Paris. They got in touch, we met up – and this was the beginning of a beautiful friendship.

Although I didn’t get a word of what they were saying on stage, I saw and felt more than enough. These guys were doing games and set-ups that I had grown tired of years ago – but with an energy or attitude I’d never seen before.

In France, the performing arts are often called le spectacle vivant, literally translated as “performance that is alive” or “full of life”. I honestly hadn’t seen much of that until these Bulgarians hit the stage.

They soon invited me to teach and perform in Sofia. I’ve lost count on how many times I’ve been back there since then.

I feel I’ve learned a lot by just spending time with them. Mostly from their way of being and interacting with each other, both on and off stage. So much more direct and upfront than what I’ve been used to in the West.

The Answer Is to Become a Dancer

Classical ballet has been a late – and great – discovery for me.

I’ve been taking regular classes since 2010. A couple of hours per week, slowly moving towards something that sometimes feels like dancing. At any rate, it’s wonderful training to increase my awareness of what I’m doing with my arms and legs.

In the summer of 2019, I spent two weeks in London with dancer and choreographer Mary Overlie. Her workshop was a true revelation to me. People were improvising together for real, with a simplicity and clarity I had never seen before.

It was physical and creative acting without any pressure to be imaginative. It was theatre and dance at the same time – without any of the usual pretensions.

I sensed I was finally getting to the bottom of things:

We could be totally selfless and yet fully present in our individuality.

It restored my faith in group improvisation. But first of all, it was 100% real.

It was pure being and doing. The presence was total – the very opposite of nothingness.

The Courage to See and to Feel

With Mary Overlie, I finally perceived the “foundations of the foundation” I had already experienced in the clown training. And above all, I understood that there is never “nothing” when you know how to see and feel.

Playing together and for each other in the physical world. Making some sense and enjoying our time before it’s over. That’s what it’s all about.

The journey continues. I still enjoy creative acting and performing. But most of all, I love seeing others learning to dance to their own tune.

Manage Cookie Consent
To provide the best experiences, we use technologies like cookies to store and/or access device information. Consenting to these technologies will allow us to process data such as browsing behavior or unique IDs on this site. Not consenting or withdrawing consent, may adversely affect certain features and functions.
Manage options Manage services Manage vendors Read more about these purposes
View preferences
{title} {title} {title}

Manage Cookie Consent
To provide the best experiences, we use technologies like cookies to store and/or access device information. Consenting to these technologies will allow us to process data such as browsing behavior or unique IDs on this site. Not consenting or withdrawing consent, may adversely affect certain features and functions.
Manage options Manage services Manage vendors Read more about these purposes
View preferences
{title} {title} {title}